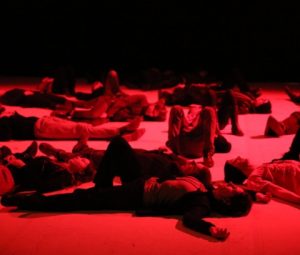 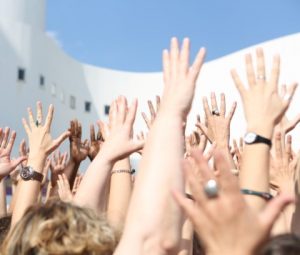 National rebirth instead of decadence! Heroic deeds instead of lazy scum! Go join the authoritarian rebellion! In Europe, new political parties propagating fascist forms of government are gaining ground or, as in Hungary, already in power. Meanwhile, organized mass murder is a legitimate political instrument for the Islamic State (IS). The media and performance collective LIGNA and Bulgarian artists Stephan Shtereff and Emilian Gatsov explore where the attraction of fundamentalism and radical communitarisation comes from. In Ecstasy and Rage , they address historical constellations, theories and analyses and visualize current developments, by allowing the audience themselves to become central protagonists of the event.

Recently awarded the George Tabori Prize for Independent Theatre, the performance and media collective LIGNA have analysed for years the mechanics and dynamics of group and mass movements in order to find out what moves, controls, manipulates groups and what in turn moves, changes, destroys or makes them accessible to experience in the first place.