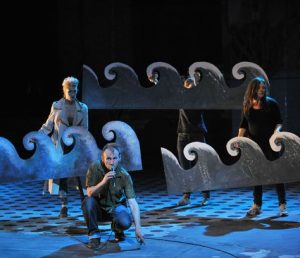 Forced Entertainment were recently awarded the prestigious International Ibsen Award 2016 for their “ground-breaking, genre-defying theatrical approach”. For over 30 years now, the British theatre collective have fought their way through the roaring emptiness, which holds the theatre and the rest of the world both together and simultaneously at a distance. Their new performance Real Magic creates a world of absurd disconnection, struggle and comical repetition. To the sound of looped applause and canned laughter a group of performers take part in an impossible illusion – part mind-reading feat, part cabaret act, part chaotic game-show. Playing the same scene repeatedly, in a series of variations, changes, distortions and transformations Real Magic takes the audience on a hallucinatory journey, creating a compelling performance about optimism, individual agency and the desire for change.