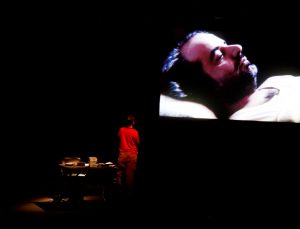 Riding on a cloud

The canvas shows an old, almost faded photo: a teenager playing the guitar, seemingly out of context. How does memory work, when the images in our head stand still and can no longer be assembled into scenes? In Riding on a cloud, Berlin and Beirut based artist Rabih Mroué establishes an impressive and very personal connection between the personal and the political: he brings his brother Yassar onto the stage. Yassar was wounded in the Lebanese civil war and has lost his ability to speak properly. As a consequence, he began to make video films, which now merge on stage with his stories into a subjective image of political developments in Lebanon. Riding on a cloud describes the fragility of his biography generated by political reality, memory and fiction.

Arabic with German and English surtitles