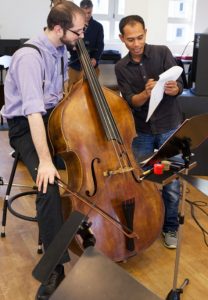 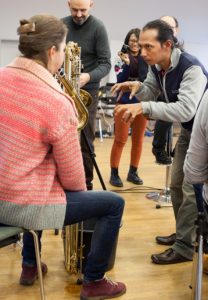 The project “Ruang Suara”(“Soundscape”) brings composers and performers from Indonesia together with Frankfurt’s Ensemble Modern. In joint workshops in Jakarta and Frankfurt, the artists experimented with Western and Indonesian instruments. Artistic openness and mutual curiosity formed the basis for an exchange about different notations, tuning systems and musical concepts. Eight select Indonesian composers were subsequently commissioned to produce pieces specifically for the Ensemble Modern, which will now premiere at the Frankfurt LAB and then be presented in Indonesia as part of the “German Season” in December 2015. Dewa Ketut Alit plays with harmonies and rhythms based on an elaborate development of the Balinese gamelan and transposes these experiments onto Western instruments.
In their compositions, Muhammad Arham Aryadi and Stevie Jonathan Sutanto augment the instrumental performance of a mixed ensemble of Western and Indonesian instruments with electronic and audio-visual elements. Joko Winarko combines scenic action with rhythms and melodies from the gamelan tradition and in doing so, also reflects the traditional Indonesian unity of theatre, dance, instrumental music and song. Risydul Malik likewise combines ensemble music with songs, dances and instrumental melodies by other participating composers. An interest in new types of sound and the body language of musicians plays a major role in the works of Muhamad Taufik, Gatot Danar Sulistiyanto and Gema Swaratyagita, complemented e.g. by texts such as Kurt Schwitter’s “Ursonate” in Swaratyagita’s “Sound of Poetry”. Their various artistic approaches not only reveal different backgrounds, experiences and types of education, but also demonstrate a very conscious handling of tradition. In a lively exchange between composers and performers, complex contexts are created that transcend cultural and artistic boundaries: a multi-cultural dialogue of art forms in which music is the host.