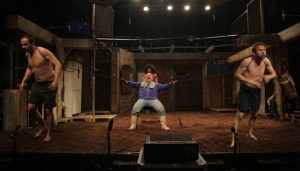 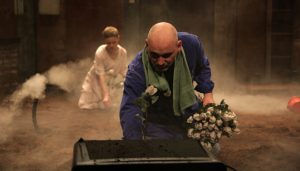 A white professor from Cape Town withdraws to the countryside after having been dismissed from his teaching position for sexually assaulting students. When his daughter is raped and impregnated at the farm by black men, she chooses to live “with the shame” and attempts to start anew amidst the very community that victimized her. In light of the historical combination of guilt, violence, expropriation and humiliation, Hungarian film maker and theatre director Kornél Mundruczó sees Europe facing challenges similar to those of South Africa at the end of the apartheid regime. Together with an outstanding ensemble of actors, he has adapted the post-apartheid novel of Literary Nobel Prize laureate J.M. Coetzee for the stage with a visionary radicalism.

Kornél Mundruczó was born in 1975 in Hungary. He studied at the Hungarian University of Film and Drama. His works were awarded at various film festivals, for example in Locarno and Cannes. For several years he worked as theater director, at the Hungarian National Theatre in Budapest, at the Thalia Theater Hamburg, Schauspiel Hannover and the TR Warszawa. In 2009 he founded together with Dóra Büki his Hungarian group Proton Theater.

In Hungarian with German and English Surtitles.

In Hungarian with German and English Surtitles