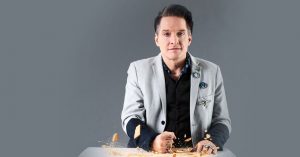 The crux of the matter lies in Scharnow, a village north of Berlin. Apparently. And de facto too. The world really is being flipped over right here: gunmen lie in wait to destroy the agents of a universal power, a book is causing bloody devastation und right in the thick of it, a brotherhood of the merry have suddenly run out of beer. When a Syrian intern suddenly stands up for a manga girl, love isn’t far away. Bela B Felsenheimer is deeply fond of the world beyond the big cities and trendy pubs. He loves the strange and bizarre that can be found in the countryside. The characters in his debut novel battle their fear of supply shortages, conspiracy theories, and a mysterious book. Some of them possess superhuman powers. If this reminds you of Douglas Adams, you are not entirely wrong. But “Scharnow” is ultimately also a description of the German soul.