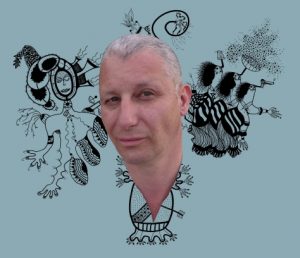 Swallowing air and farting it out, that’s the main life skill of the weatherfish. But what’s best about him is his evocative German name: Schlammpeitziger. When German electronic artist Jo Zimmermann launched his solo career in the early 1990s he chose to be identified with this creature living in the flat muddy waters of the European and Asian plains. Unlike the fish, Schlammpeitziger’s early reputation was built on his inventive use of cheap Casio synthesizers and composite nouns, such as Erdrauchharnschleck, Burgfensterrhythmuskuckloch, Freundlichbaracudamelodieliedgut, Spacerokkmountainrutschquartier or Augenwischwaldmoppgefloöte, to name but his first five albums. This here is his eleventh, and while Schlammpeitziger’s art has moved on, true to his nature it does contain some colourful references to farting.