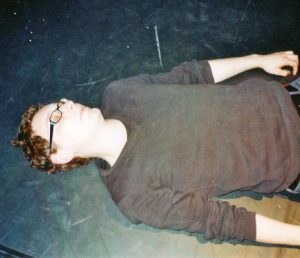 When is a person silent and when is someone being silenced? When does silence become powerful and when powerless? In what way do we speak about silence? What is concealed by silence? Without recourse to ideology and religious discourse, the performance collective ongoing project explores the power(lessness) of silence in its new production. Be it the doctor’s oath to secrecy, a minute’s silence or the vow of silence: being silent is a social practice most often perceived as either protest, confirmation, religious ritual, knowledge, ignorance or secrecy. In one of the last places where it is still taken for granted that the majority of those present will remain silent, ongoing project would like to stage silence as a material presence and treat it as audio material, form, music, rhythm and gesture – as a monstrous presence that transcends categories and boundaries. As a collective for performances, happenings, installation, visual art and non-registered tendencies, ongoing project was founded in 2011 at the Gießen Institute for Applied Theatre Studies. For founding member Chris Herzog, this performance – created as part of a cooperation with the Hessian Theatre Academy (HTA) – is simultaneously his graduation piece.