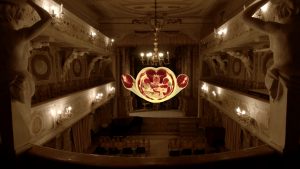 “A Demonstration” is a monster film with no monsters. Inspired by the existence of taxonomies of monsters at the heart of Early Modern European science, the film explores and reinterprets a way of seeing the natural world that is almost impossible to imagine from today’s vantage point. Early Modern naturalists were guided by a logic in which scientific truths were discovered through visual analogy. The word ‘monster’ comes from the latin ‘monstrare’, meaning to show, to reveal, to demonstrate. “A Demonstration” picks up on these themes in a poetic exploration of the boundaries of sight and the metamorphosis of form.

A fossil cast in plastic, an artificial plateau, classic cars running on the fumes of the nation.

Utah Tar Sands Resistance has been fighting experimental mining in the Tavaputs Plateau for almost a decade, setting up camp every summer in sight of heavy equipment and construction crews. The film asks, how might the concept of horizontalism be applied to the physical horizon, its decimation, and to capital’s propensity for vertical extrication? Ancient Sunshine interweaves the endless remaking of the Western landscape with labor history, reflections on anarchist organization, and interspecies economies, such as animal husbandry.
Ancient Sunshine consists of interviews with the Utah Tar Sands Resistance primary organizers and other Utah land protectors, and sets their voices in and against an industrialized landscape. The film draws on a surprising array of present and historical voices, drawing attention to the role of resistance and kinship during times of threat and extinction.
Toward a poetic solidarity, toward a formal politics.

Charging scenes of the present with dystopian speculation, Field Resistance teases the boundaries between documentary and science fiction to investigate overlooked environmental devastation in the flyover state of Iowa. Observational documentary-style footage collected from disparate locations – a university herbarium, karst sinkholes inhabited by primordial flora and fauna, a telecommunication tower job-site, among others – is used to evoke a fictional, dystopian narrative of plant ascension and humanity’s retreat. Rejecting the human individual as the focus of narrative cinema, the film adopts the perspective of a symbiotic “implosive whole” in which humans and nonhumans are related in an overlapping, non-total way.

There Is Something In The Air is a call from the periphery of sanity. This documentary essay is a series of dream narratives, and accounts of spiritual possession as experienced by women ‘petitioners’ at the shrine of a Sufi saint in north India. The shrine is a space where ritualised performance becomes the predominant rule of engagement, and one can begin to think of the possibilities that ‘insanity’ produces. The film invites the viewer to a fantastical world, where fear and desire are expressed through dreams and ‘afflictions of air’. The drama unfolds via dreams, and appearances of djinns and disappearances of women. The shrine becomes a space of expressions of longing and transgression. Here, boundary breaches are the norm and if spirit possessions are usually recounted as a loss of the autonomy of the self, There is Something In The Air explores how a personhood may also be expanded through a relationship of reverie with non-human forces.