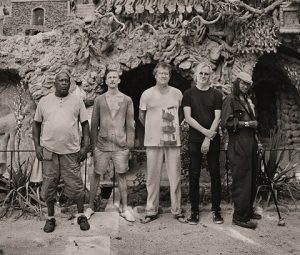 Sly & Robbie, drummer Sly Dunbar and bassist and keyboarder Robert Shakespeare, are reggae legends from Jamaica. They began their career in the early 1970’s and received the first Grammy award ever awarded to a reggae album in 1985 with their band Black Uhuru. In 1999, they won their second Grammy for the duo album “Friends”. As a producer duo, Sly & Robbie are known for their love of innovation: they combine dancehall, soul, hip-hop and reggae with many other influences. In their successful project with Nils Petter Molvær, they create a unique sound panorama, spanning the colourful, elegiac atmospheres of Norwegian Jazz – borne by Molvær’s sublime trumpet playing – and the energetic grooves of Jamaica. Together with Eivind Aarset (guitars) and Vladislav Delay (electronics), this is a band of musical soulmates, beyond all genre boundaries.