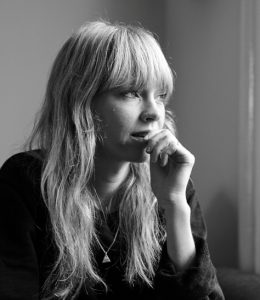 With just a handful of songs and a guitar, Lucy Rose set out a few years ago to London to make it in the local singer-songwriter scene. While her porcelain voice gradually gained her a reputation on YouTube and she toured throughout the country as background singer for the folk rockers Bombay Bicycle Club, she continued to write her own songs and perform solo. Finally, she signed with Columbia Records and gained the support of producer Charlie Hugall (e.g. Florence and the Machine). Her debut album Like I Used To in 2014 featured delicate acoustic guitar and reduced arrangements and immediately landed in the British charts. The 27-year old then took two years tinkering around on the glittering pop-electro sequel Work It Out and recorded most of the instruments herself. In the relaxed atmosphere of the Mousonturm-Lokal, Lucy Rose will be giving one of only three concerts in Germany– supported by the Blues duo Swampmother.