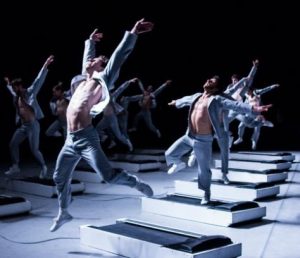 One night, three ground-breaking ballet pieces: Wayne McGregor is resident choreographer at The Royal Ballet, London. He is regularly commissioned by and has works in the repertories of the most important ballet companies around the world, including the New York City Ballet and the Paris Opera Ballet. He has choreographed for theatre, opera and film (‘Harry Potter and the Goblet of Fire’ and ‘Tarzan’,) as well as for music videos (Radiohead). On the opening night, he will be presenting his piece “Infra”, which explores what goes on under the surface of human relationships. His solos, pas de deux and group sequences are emotional and brimming with visual power.

Next the director of the Hessische Staatsballet Tim Plegge shows a new creation designed to be an adventure. The choreographic approach: artistic intuition. Together with his dancers, he tries to free himself from the totalitarian system surrounding us.

The third piece is an exaggerated portrayal of every- day events. In “Left Right Left Right”, Alexander Ekman elevates normal walking to the highest level of concentration, timing and rhythm. This highly successful piece by the young Swedish choreographer met with sanding ovations at the ballet showcase “Aufwind”.