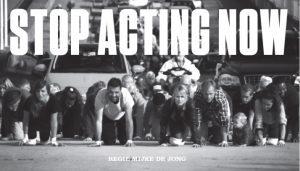 At the end their social engagement project The New Forest, the Rotterdam theatre collective Wunderbaum is making a film. The goal is to radically change the world: Maartje wants to help families in debt, Marleen opens a Japanese-style crying café to battle our obsessively-positive society. Matijs develops an app and feverishly searches for major investors, whereas the future of art only lies in radical happenings for Walter. Wine has a child and thinks that utter devotion is our best investment in the future. Directed by Mike de Jong, Stop Acting Now resolutely targets that place between fact and fiction, in which the theatremakers of Wunderbaum feel most at home. Dutch with English Subtitles.