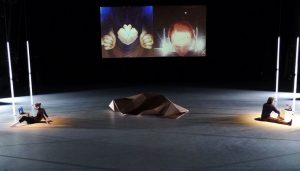 As test-subjects in a twittertubeandfacebook-apparatus, absurd characters emerge following the dictate of current online-occurrences. But neither do they obey the apparatus, nor are they recalcitrant, rather, they are moving between the poles, in- and outside the framework. The performers are constructing, direct and live on stage, text sculptures as a form of dance and an ever-new image of themselves via webcam. They are in a state of permanent simulation and mutual imitation, where there is no longer a distinction between original and copy, model and image, reality and imagination. Thus, personality and expression can only be attributed retrospectively.

The term Talking Head does not only recall one of the most successful New Wave bands of the 1980’s turn of the decade, it also denotes the frame of a close-up camera shot on the speaker. They all stage themselves according to the rules of Cinema Vérite: the show-off in idle chatter, the serious reporter in the newsroom, the artist amongst his art. The body looses its consistency and exists solely as a masquerade; the squall of words and from a constantly shifting identity, which follows the individual fate’s every move.

If, however, we can/may perceive blocks of text as sculpture, as kinetic plastiques of vibrating air, the we circumvent the problematic need for understanding and find ourselves within an installation of Syntax Errors, Over-Morphing, Sound-Poetry, Non-Sense, Sonic Painting – in short: “Meaninglessness”-turned-sound, as a linqua franca for the builders of the Babylonian Tower.