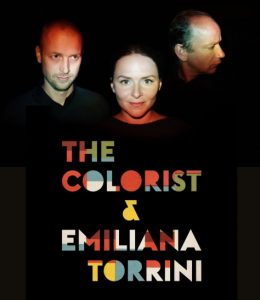 The Colorist formed in 2013, is an unusual orchestra founded and led by Aarich Jespers and Kobe Proesmans to accompany invited singer/songwriters and their repertoire. The unorthodox use of classical instruments in combination with a wide variety of self-created musical instruments forms the foundation of innovative sounds and grooves. Songs are reorchestrated and recomposed, the contours of these songs are re-colored, in the same way a colorist would do in a movie or comic book. Although the arrangements of the songs are completely new, you can call it ‘an acoustic live remix’ or ‘an inverse Karaoke’.

The Colorist invites singers they admire into their world and whose music they feel a strong connection with; previously, they had the honour to work with Sumie Nagano (Japan/Sweden – Bella Union) 2014, Cibelle (UK/Brazil – Crammed Disc) 2014 and Emiliana Torrini (Iceland – Rough Trade) 2015. The Colorist’s last collaboration with Miss Torrini received raving reviews in the Belgian press and concerts sold out in almost all venues. This collaboration is extended into a series of upcoming international concerts and the release of a live recording.