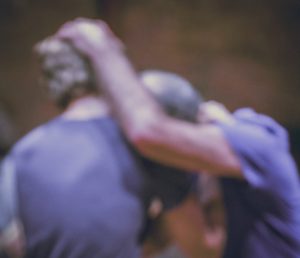 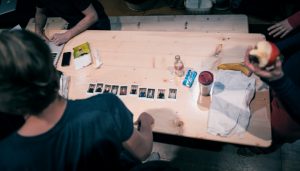 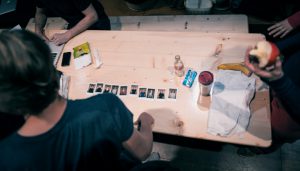 People from all over Frankfurt meeting for the first time. Not on Facebook, not in a chatroom, but live on stage in front of an audience. As neither professional actors nor dancers, their encounters contain moments and situations of particular intimacy. Belgian choreographer Jan Martens and film maker Lukas Dhont have posted a series of open calls for common people to participate in this unusual series of blind dates: after preparatory workshops, each show features 20 duets that each bring two people from very different backgrounds and contexts together. And while they follow simple questions and instructions, the results are individual interpretations of topics such as intimacy, exchange and trust, as well as simultaneously a unique portrait of their city. Over the course of the two-to-three-hour performance marathon, the audience is free to come and go between the duets.

No language skills required * Concept & Direction: Jan Martens and Lukas Dhont * By and with: 34 citizens of the City of Frankfurt * THE COMMON PEOPLE FRANKFURT/TALLINN is funded by “Change of scene – A program of the Robert Bosch Stiftung in cooperation with the International Theater Institute” * THE COMMON PEOPLE FRANKFURT is co-presented and supported by THIS IS WHAT WE SHARE – Flanders & The Netherlands Frankfurt Book Fair Guest of Honour 2016 * It is a project of the Verbund internationaler Produktionshäuser e.V., funded by the German Federal Foundation * Coproduction: tanzhaus nrw, spring performing arts festival, Wiener Festwochen, CDC Le Gymnase, ICKamsterdam (in the framework of the Nieuwemakers Regeling) * With support of: STUK kunstencentrum, deSingel, CAMPO, wp Zimmer * The performances in Frankfurt resulted in the frame of Tanzplattform Rhein-Main * Tanzplattform Rhein-Main is a project of Hessian State Ballet and Künstlerhaus Mousonturm and is made possible by Kulturfonds Frankfurt RheinMain, funded by the Cultural Office of Frankfurt, Hessian Ministry for Science and Art and the Stiftungsallianz [Aventis Foundation, BHF-BANK-Stiftung, Crespo Foundation, Dr. Marschner-Stiftung, Stiftung Polytechnische Gesellschaft] * Co-funded by the Creative Europe programme of the European Union as part of DANCE ON, PASS ON, DREAM ON.