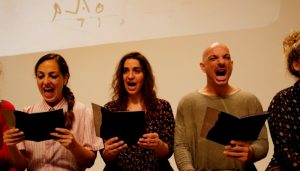 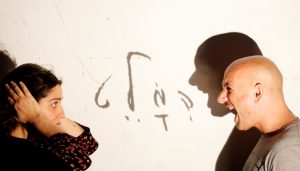 The Hebrew Notebook – And other stories by Franz Kafka

A little blue notebook with a collection of Hebrew words and their German equivalents inside, jotted down in Franz Kafka’s handwriting. Ruth Kanner has made this unexpected find from the depths of Jerusalem’s national library the starting point of a theatrical composition. Out of this dense and promising vocabulary, the actors develop performative and installative fragments, which together create an arena for Kafka’s world of Hebrew words and their interpretations. In this project, the Ruth Kanner Theatre Group from Tel Aviv follows in the footsteps of a Jewish tradition of storytelling and combines literary and documentary texts in constant reference to their own life experiences.

In German, Hebrew, English with German translations * by Ruth Kanner and the performers Shirley Gal, Ronen Babluki, Adi Meirovitch, Yael Mutsafi and Tali Kark * Word images: Guy Sagee * Design: Kinereth Kisch * The performance is part of the masterclass Kafka and the Theatre at the Institute for Theatre, Film and Media Studies at the Goethe University.