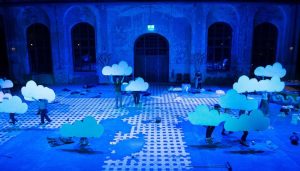 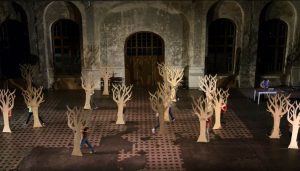 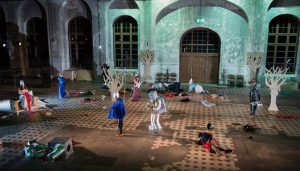 This March, we have invited the legendary British performance company Forced Entertainment to celebrate their thirtieth birthday with us in Frankfurt. In the big hall of the Frankfurt LAB, The Last Adventures sets a neo-baroque apparatus of illusions in motion to celebrate the entire strength and dubiousness of theatre in a spectacle so opulent, as if it were its last. Attired in bizarre costumes and monstrous props, the ensemble of 12 performers engage in initiation rituals and ghoulish dances, appear as a giant sea monster, a suite of dancing trees, a band of soldiers, whose war games turn sour or a chorus of ghostly dead. Over it all, the massive soundtrack of Lebanese sound artist Tarek Atoui buzzes, whispers and roars. A large-scale choreography in an extravagant live art installation, The Last Adventures is more than anything else, a piece about memory, mixing folk tales, science fiction, children’s picture books and epic myths. In it, the group – founded in 1984 under artistic director Tim Etchells – lead us once more on a trip into their unique, playful and simultaneously highly insightful theatrical universe.