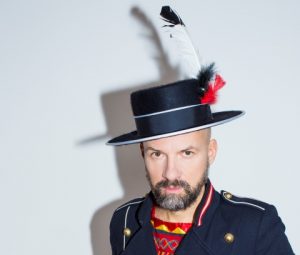 At the beginning of this century, Stefan Hantel created a new musical genre under the pseudonym Shantel with his “Bucovina Club” compilations. His song “Disko Partizani” was Top 20 in many European charts, Number 1 on the Turkish charts and received platinum status across Southern Europe. Meanwhile, he has also written film music for Fatih Akin, was the first German musician to perform at the legendary English Glastonbury Festival and played in Montreux – in front of the visibly impressed colleagues Prince and Quincy Jones. He still lives in Frankfurt; recently, even surprisingly announcing his candidacy for the mayor’s office. But in the end, Shantel preferred to stay an artist. When he’s not touring with his band, he’s out and about as a DJ in clubs worldwide – always in search for encounters with other people. That is why he’s looking forward to coming to the LOKAL Listener.