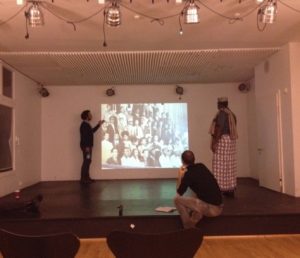 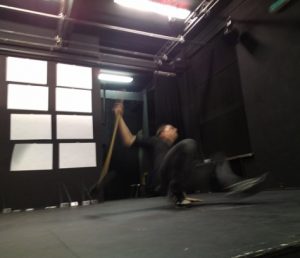 With its radical aesthetic of equality, the National Theatre of Somalia served as a symbol of a new socialist society until its destruction in the civil war of the 1990’s. By symbolically reopening it in exile, Daniel Schauf and Philipp Scholtysik began a project series in 2012 with the aim of investigating the forgotten aesthetic of the National Theatre of Somalia, to find the National Theatre of tomorrow, an undead revenant of a utopian promise: a space of mutual cooperation, in which nothing and no one is covered up by homogenisation and hierarchy, but rather in which the resistance of the material lives on. Driven by their vision, the artist team is caught up in an expedition into the uncertainty of their own existence, into the depths of the half- or subconscious, into a dark labyrinth of lies and guilt.

BLICKAKTE is the first part of the series.

A project in cooperation with Theater Drachengasse Wien and National Theatre of Somalia.