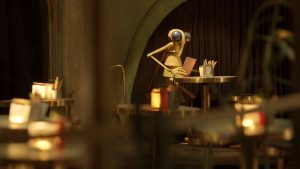 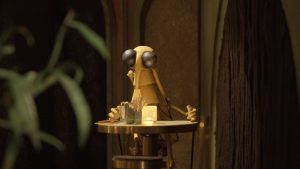 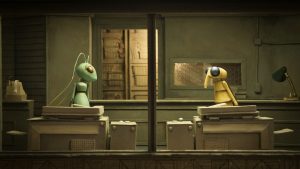 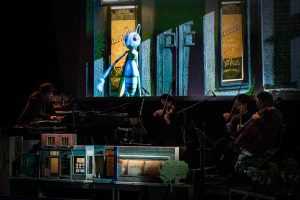 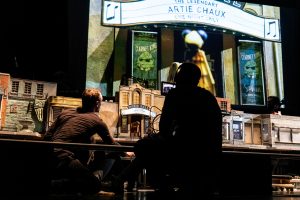 Eric San aka Kid Koala shows a stirring adventure of a clarinet-playing mosquito who moves to the big city in order to fulfill his dream of playing at the prestigious Sid Villa’s Music Hall. On stage, a team of 15 performers including a string trio and Kid Koala on the piano and turntables create a “live animated film”. Using 20 miniature sets, 75 puppets and 8 cameras, this captivating combination of film technology, theatre, puppetry and music allows the performers to tell a heart-warming story that is completely free of dialogue, much like early Charlie Chaplin films. Kid Koala is not only one of the world’s best scratch DJs and releases albums on Ninja Tune, but he is also an award-winning graphic novelist, composer for film and video games, and theatre maker. As such, he has proved that beats, puppetry and humour can be used to expand the medium of theater to the delight of the audience.

We acknowledge the support of the Canada Council for the Arts and the Government of Canada.

For those who are unfamiliar, can you give us the general synopsis
for Nufonia Must Fall: Live and The Storyville Mosquito? Also,
where the inspiration for these stories and characters came from?

Nufonia Must Fall is a story about a robot who is trying to write love songs
but is unable to sing. It was a graphic novel I had originally published in
2003 and that included a CD soundtrack composed on piano and turntable.
The book itself was dialogue- free so it read a bit like a screenplay to a silent
film. A decade later, with the help of director K.K. Barrett and a wonderful
team of collaborators, it evolved into a touring “live film” that is performed,
filmed, projected, scored and foleyed in real time on stage by a team of
puppeteers, camera operators, and musicians.
THE STORYVILLE MOSQUITO is our new show in that style. It’s a story
about a mosquito that moves to the big city to fulfill a dream of performing at
the world famous Sid Villa’s Music Hall.
I grew up on a steady diet of Charlie Chaplin films, The Muppet Show, Louis
Armstrong and Billie Holiday records. I’ve also always loved robots and
outer space. And my favorite TV shows growing up were always nature
documentaries about the deep sea or the insect world. On a trail through
the rainforest in Costa Rica I saw a highway of leafcutter ants. I’m not one to
get starstruck much, but seeing leafcutter ants in real life was just incredible.
I had seen them on countless TV nature documentaries since childhood and
I was literally awestruck. All the main characters from THE STORYVILLE
MOSQUITO are from the insect world and all the characters in Nufonia and
Space Cadet are either robots, astronauts or engineers. I feel like in an
alternate version of this life I could have happily been an entomologist,
astronomer or robotics engineer.

Can you explain what inspired you to do a live production with
puppets and how the idea of miniature sets came into play?

The short answer is just the fun factor! K.K. Barrett likes to call it a “high
tech/low tech” show. Yes, there are eight cameras, 20 sets, 70 puppets and
lots of video cables and mini lights… but at the heart of the show, it’s still
live human energy that makes it all work. If the people on stage stop,
everything stops. It’s like an elaborate choreography with the whole team.
It’s like having 15 people on one surfboard, everyone has to balance and
adjust constantly to make each scene work in terms of timing the action,
camera moves, lighting cues, musical stings, etc.
We had originally talked about doing it at human scale on one or two lifesize
sets. Perhaps it would have felt more like a traditional theatre piece if
we had done that. Eventually we decided to go with a miniature scale and
puppets because we could include more of the locations and cinematic
shots in the original graphic novel.

With Nufonia Must Fall: Live’s production to the production of The
Storyville Mosquito —you’ve scaled things larger to include closeups
with Muppet-sized characters, and then even smaller to be
able to pull off a crane shot. What drives you to keep expanding
and increasing the complexity of your projects?

It’s really about having fun with the format of live presentations and also
letting the audience into the process of what we’re doing. With these shows
you can view the “final product” on the silver screen that’s hanging above
the stage and at any moment look down on the stage and see “The Making
Of” happening in real time. There’s an urgency to it all, knowing that it’s
being created before your eyes and that it can fall apart at any moment. And
that’s the point really, nothing is locked.
We’ll change the show from night to night and build new set pieces or add
or change music cues for different cities and audiences. It’s this fight to not
go into “autopilot” during the show. From a performance perspective, it
keeps everyone on their toes, and hopefully it’s also enjoyable for the
audience to witness.