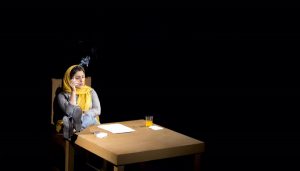 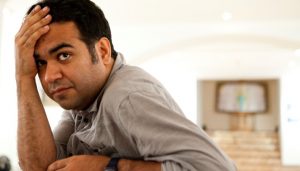 In performances of intense linguistic and theatrical power and density, Iranian author and director Amir Reza Koohestani relates individual biographical dramas to their social and political realities. Timeloss tells the story of a couple in Iran, who in the moment of their separation silently and quietly hope that others may save the relationship. Years later, it becomes clear that both were incapable of building a new life after their separation, that neither of them were able to accept the past nor to finally turning away from it. Koohestani’s own biography provides the framing narrative for the piece: at 22 and still completely unknown as an artist, he went through a dramatic separation. This experience triggered the piece Dance on Glasses. Twelve years later – as a meanwhile internationally successful and established theatre artist – he invited both original actors from the piece to record the text of Dance on Glasses one more time for the production of a DVD version. And so both actors meet again in a Teheran dubbing studio. Back when the piece first played, they used to be a couple. Now, separated for years, they recapitulate again their dialogues and positions – as if their relationship had just only ended. Stefanie Carp, former theatre director of the Wiener Festwochen and dramaturge, will give a short introduction to the work of Amir Reza Koohestani and moderate the artist talk.