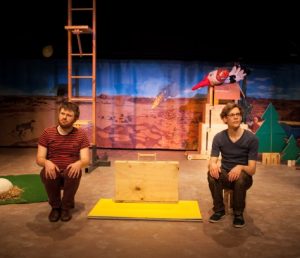 TO BREAK – The Window of Opportunity

In TO BREAK, the young Belgian duo Robbert&Frank Frank&Robbert present their very own idea of theatre magic: shelves packed with objects made of wood, fabric, plastic and metal stand lined up next to a Western movie set. Like two splapstick cowboys, the theatre sculptors stagger across the stage with their objects. One scene leads to another. Whether meter-long wooden slats, toy cars, a wobbling cow head or a gun (made of chocolate as typical for the theatre and subsequently eaten together with the audience) – the empty stage gradually fills up with colors and objects and transforms into a vibrant wilderness packed with unpredictable scenes. Until there is no holding back and everything sets itself in motion – onto a road trip across time and space, with excellent prospects of adventurous possibilities.

No language skills required * By & with: Frank&Robbert/Robbert&Frank * Coaching: Pol Heyvaert * Sound design: Koenraad Vandersyppe * Technichians: Piet Depoortere, Koenraad Vandersyppe & Wout Janssens * Production: CAMPO * Thanks to: Charlotte Vanden Eynde, Roman Vaculik * With the support of the flemish community, the province of East Flanders and the city of Ghent * Supported by the Flemish Community, the Province East Flanders and the City of Ghent * All events of the project series „Tolle Künste“ are contributions to the official programme for Guest of Honour Flanders & The Netherlands at the Frankfurt Book Fair 2016. Funded by Dutch Performing Arts and the Flemish Authorities.

for everybody age 8 and up