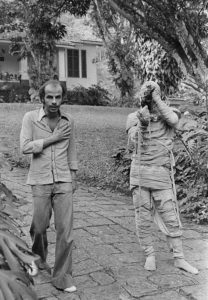 Do the inhabitants of the Amazon region devour their enemies, or do they only tell visiting ethnologists that? And what are poets and filmmakers up to when they turn cannibalism into an aesthetic principle? The concept of anthropophagy plays an important role in the ethnology of the Amazon region, just as much as in the Brazilian avant-garde of the 20th century, which writer Oswald de Andrade set the tone for in his 1928 “Cannibalist Manifesto”. Debating on the subject are Eduardo Viveiros de Castro, whose work on the Amazon region make him one of the leading ethnologists today, Berlin journalist, philosopher and biologist Cord Riechelmann and Berlin philosopher Oliver Precht, who has translated both Viveiros de Castro as well as de Andrade into German.

In English * The event is part of the series “Tropical Underground. Avant-garde and Anthropology in Brazil” organized by the Institute for Theatre, Film and Media Studies at the Goethe University together with the Museum for World Cultures and the Kino im Deutschen Filmmuseum. The programme also features an exhibition of photographic works by Viveiros de Castro at the Museum for World Cultures (Vernissage November 17, 7 p.m.) and a lecture and film series at the Filmmuseum.