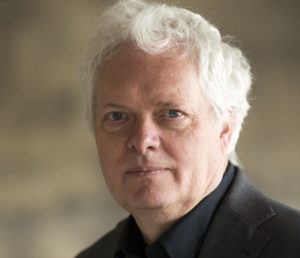 As a composer and director, Heiner Goebbels ranks among the most important protagonists of the international music and theatre scene. As artistic director of the Ruhrtriennale 2012-2014, he will personally introduce the programme of this year’s festival season, which runs from August 15 to September 28, in his Unguided Tour. With photos, videos and examples of music, he will present a selection of the artistic new productions, invited performances and concerts specially featured in this year’s programme.

Boris Nikitin is a theatre director, author, curator and essayist. In his plays, texts and festivals, he has been exploring the boundaries between documentation, propaganda and fake and the subsequent constructions of reality and identity since 2007. Since 2016, Nikitin has also increasingly turned his attention to the relationship between art and illness. “Like few others, Boris Nikitin pushes theatre to a critical edge,” writes Theater heute. In 2017, Nikitin was awarded the J.M.R. Lenz – Dramatikerpreis for his complete works, and in 2020 he received the Swiss Theatre Prize. Nikitin’s works have been invited to the Impulse Theater Festival four times and he is a regular guest at Mousonturm, most recently with his solo piece “Attempt on Dying”. The thoughts formulated in this play on the subject of coming-out form the basis for Nikitin’s contribution to the publication “Learning from the Lockdown”.