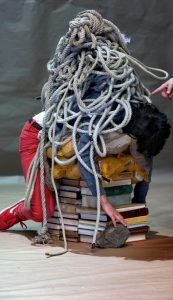 If we believe the four performers on stage, then the world is an entirely unexplored, experimental virgin territory. It seems almost incomprehensible that so much is still “untried untested” and downright demands to be fingered, thrown, exchanged, knotted, squeezed, crumpled, trampled on, ripped apart, pulled apart, bent, layered and brought to its downfall. In her new piece, Kate McIntosh combines play and science like a child into a ludicrous research project, which asks the fundamental questions of life with all necessary sobriety. In her last two pieces Loose Promise and Dark Matter, Kate McIntosh explored the power of text and imagination. In Untried and Untested, she focuses once again on the materiality of and the interaction between bodies and objects in choreography.

Kate McIntosh from New Zealand is a director, performer and video artist based in Brussels. As a trained dancer, she has worked e.g. with the Meryl Tankard Australian Dance Theatre, Random Scream, Simone Aughterlony and Tim Etchells. This year’s guest of honour at the Frankfurt Book Fair is New Zealand. For this reason, Mousonturm will be presenting further work by Kate McIntosh.