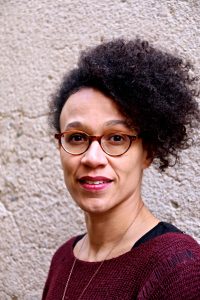 Vanessa Eileen Thompson, Ph.D. is research associate at the Goethe-University Frankfurt’s Institute for Sociology. Previously, she was a visiting scholar at the Department of Black Studies at the University of California, Santa Barbara. Her research and teaching focuses on critical race theory and methodologies, postcolonial and decolonial feminist theories and methodologies, Black Studies, Gender- and Queer Studies, theories and criticism of securitization, as well as transformative justice. Thompson is also politically active in these areas. Her most recent article is “Hey, Sie da!“ Postkolonial-feministische Kritik der Polizei am Beispiel von Racial Profiling (“Hey You There!” Postcolonial-Feminist Criticism of the Police based on Racial Profiling, In: Kritik der Polizei. ed. D. Loick, Campus Verlag, 2018).

At im*possible bodies #2, Vanessa Thompson will speak About Situating and Artistic and Cultural Institutions of Solidarity. A Postcolonial-Feminist Intervention (in German).

Colonial continuities also continue to leave their mark on the arts as they reproduce epistemic, aesthetic and structural, violent exclusions. Based on an analysis of coloniality by institutions of art and culture, this input questions whether institutions can be decolonized by inclusion and discusses the possibilities of a situating practice of solidarity.