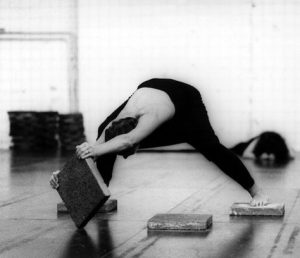 “What moves me?” is the central compositional question. As Reinhild Hoffmann once stated in an interview, only when every movement answers this question for itself, is it possible to be free of other styles and create unique movement. The answer can found in a precise analysis of movement and its terms and conditions.

“Vier” (WP 1992)
In her work, Reinhild Hoffmann constantly compares the contents and the formal structure of her choreography in detail with each other and re-evaluates their relationship. In her solo “Vier” – created in 1992 – four slabs of stone delineate the space. The dancer’s range of movement is restricted and at the same time references the space beyond the stones. Her body, constantly tensed in different directions, points beyond the boundaries of the space. She literally takes her position into her own hands, changes the space and herself. Form and person enter into a tense dialogue. Exploring the boundaries of personal space is a distinguishing quality of Reinhild Hoffmann’s choreographies. Hedwig Müller in Reinhild Hoffmann/Susanne Linke – Pionierformen, Programme ImPulsTanz Vienna, Hebbel-Theater, Berlin, 2001

Lecture-Performance with Alexander Katchko and Reinhild Hoffmann featuring Alexander Katchko’s book about the duet “Auch” based on a choreography by Reinhild Hoffmann and documentation of the reconstruction of “Auch” by Tanztheater Bielefeld 2012 (funded by Tanzfonds Erbe, an Initiative of the Federal Cultural Foundation). Documentation: Andrea Keiz.