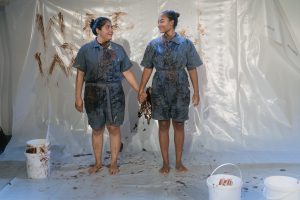 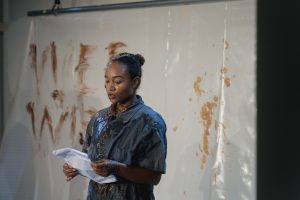 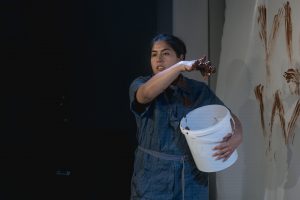 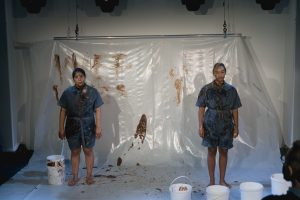 WHITE CUBE _dekolonial is a 15-minute performance in which Nebou N’Diaye & Katalina Götz interweave the history of colonial power relations, including scientific legitimization since the Enlightenment, with their own complex experiences as (B)POC. By radically dealing with four differently coloured types of pudding, which stand for the alleged four “types of people” and their skin colours (Carl v. Lineé, Systema Naturae), they confidently and sensitively deconstruct the “White Cube” into a self-determined emancipatory space of empowerment. Originally a thematic installation piece AZIMUT dekolonial – ein Archiv performt (premiere March 2019, Kampnagel), WHITE CUBE_dekolonial has since been transformed into an independent format representative of HAJUSOM’s status as a transnational collective.

Language: German
The recording is accessible until the end of the festival.
Subtitles in German
Audio Description

There will also be a workshop Sun, 23 May 4 p.m. with the two performers Katalina Götz and Nebou N’Diaye. For more info you can follow this link.

Nebou N’Diaye was born and raised in Hamburg. She has been a member of HAJUSOM since 2010 and can be seen on stage as a performer in numerous projects by the ensemble, including Silmandé (with Ensemble Resonanz, Kampnagel) and the play das gender_ding, which was invited to the Theatertreffen der Jugend at the Berliner Festspiele in 2015. She is currently on stage with the performance WHITE CUBE_dekolonial, a scene from the production Azimut_dekolonial – ein Archiv performt, last performed at the Fluctoplasma Festival 2020. In March 2020, she went to the OTHNI Laboratoire de Théatre de Yaoundé in Cameroon to perform and participate in workshops as part of the production Azimut_dekolonial. She has also performed at the Junges Schauspielhaus Hamburg, the Böll Foundation, Lukulule e.V., and the Altonaer Museum, where she organised an exhibition which was part of Black History Month Hamburg 2020. Most recently, she worked on an exhibition on the German-Cameroonian colonial period at the Museum am Rothenbaum für Kulturen und Künste. She has been studying Metropolitan Culture at HafenCity University Hamburg since 2019.

Katalina Götz has been a performer with HAJUSOM since 2012. She has helped developing transnational methods and collective working methods in various productions, including das gender_ding (2013), Aller et Retour (2015), a piece in cooperation with artists from Burkina Faso and Silmandé (2017), a music performance with the resident orchestra of the Elbphilharmonie Ensemble Resonanz as well as Azimut (2019) with Martin Ambara from Cameroon. In addition to assisting the artistic director, she is primarily active in the field of transfer, participating in panels including a workshop on decolonial aesthetics at the International Research Center for Interweaving Performance Cultures at FU Berlin with Walter Mignolo. She has been studying history and Spanish education since 2013.

Vera Heimisch lives and works as a cultural anthropologist and artistic production manager in Hamburg. In her work she focuses on the intersection of postcolonial studies, decolonisation processes and cultural production. She coordinates projects for festivals, artists, and institutions, including steirischer herbst, Heidelberger Stückemarkt, Hajusom, and the University of Bremen. She studied cultural anthropology, art history, and transcultural studies in Graz (Austria), Cali (Colombia), and Bremen (Germany). She is currently working on an ethnographic research project on the Mexican singer Chavela Vargas in cooperation with the Universidad Autónoma Metropolitana Mexico City.

Dorothe Reinicke studied German and History (M.A.) in Freiburg, Vienna and Hamburg. After a short career as a punk singer, she worked as a freelance actress and performer, taking further training with a focus on voice and singing, including North Indian raga, modal improvisation, classical singing, Linklater training and extended vocal techniques. In 1993 she changed sides to directing, conceptualising and producing interdisciplinary performances, mostly in co-production with Kampnagel Hamburg. Themes range from images of women in German Romanticism and National Socialism to primate research, cyborgs, transculturality and birdsong. As a co-founder of Hajusom, she has continuously been one of the artistic directors since 1999 and has been an outside-eye artistic collaborator in the HAJUSOM ensemble as well as senior adviser since 2021.