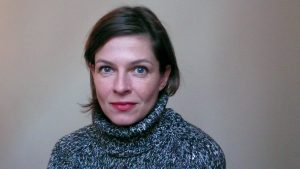 It all begins with a knife. Facing her father, the nameless narrator in Britta Schröder’s first novel Zwölfender suddenly seizes that knife and stabs him to death. Then she boards a place and goes on a journey – first to Florida, then to Chile, where she wanders through the driest desert in the world in an attempt to forget herself. On her way, she reaches her psychological limits as she meets a disabled anthropologist, a poker player feigning a disability and two Finnish brothers, whose sister has refused to speak for years.

By the Hessian Literaturforum