The Frankfurt Positions were organized in 2001 for the first time as a field for experience and knowledge. Almost every two years, they attempt to formulate a position on current social change in concerts, theatre, exhibitions, symposia and performances. As an initiative of the BHF-BANK Foundation, they initiate a continual creative process in order to develop new perspectives and social fantasies. Pieces are commissioned from the participating artists under the auspices of independent professional juries. The festival is supported by a large cultural network of 17 institutions in Frankfurt. Since its founding, the project have provided ca. 50 dramatists, visual artists, composers, choreographers and filmmakers with a chance to create new work in their fields and present these in and with important institutions.
The sixth Frankfurt Positions will be taking place from January 18th until February 6, 2013 on the subject of At the Border? On the Future of Modernity. For our part, Künstlerhaus Mousonturm will be showing the co-production “THEATRE” by the performance collective Superamas in January and the world premiere of a new piece by the Cologne artist couple Hofmann&Lindholm in February: „Nebenschauplätze Nr.1: Das 20. Jahrhundert – Re-Enactment flüchtiger Erscheinungen“. 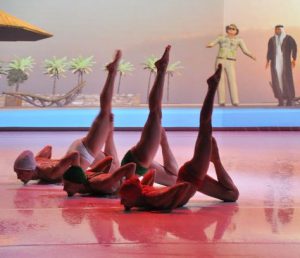