First escape and rescue plan for the Rhine-Main region

If you take the commuter train Nr. 8 from the Main Station in Mainz and to Hanau, the length of the journey is more or less exactly equivalent to the breadth of Greater Tokyo with its 35 million inhabitants – a expanse of urban sprawl considered impossible to evacuate, not least of all since the 2011 earthquake and nuclear catastrophe. Japanese director and conceptual artist Akira Takayama has therefore made it his business to search for individual rescue alternatives, conceive new types of shelter and chart hitherto unknown escape routes where the government has declared escape impossible.

EVACUATION began 12 September 2014 and as the first escape and rescue plan for the Rhine-Main region, it lends new meaning to the idea of evacuation. With Frankfurt’s Künstlerhaus Mousonturm as their basis, an international artistic and research team under the direction of Akira Takayama was developing this massive art event that seeked to connect online and urban spaces.

EVACUATION invited visitors to let themselves be guided into making new discoveries from 12 September until 5 October over the course of three weeks at up to 30 commuter train and streetcar stations along the S1, S8, S9 lines and at the stations between Frankfurt-Ost and Hanau and one additional central point in Darmstadt. These train stations between Wiesbaden, Mainz, Frankfurt, Offenbach and Hanau were transformed into the starting points for art projects, happenings, presentations and artistic ready-mades, transformations and interventions, secret gatherings and quests. And instead of the customary theatre ticket, all that was required was a valid RMV ticket.

An interactive web-portal was launched at www.evakuieren.de on 12 September at the start of the project to assist with the necessary rescue operations: visitors were asked to answer a few specific preliminary questions, so that the website could ascertain the individual degree of everyday frustration or urban identity fatigue. As a result of this short interview, the programme suggested an initial starting point within the RMV network to those searching for escape, e.g. a commuter train station in the countryside, a spot in front of certain factory gates or in the middle of the city centre. The website also provided an overview of all train stations and stops involved into the project, important basic information, as well as special opening hours or possible on-site expenses that may arise. However, the website gave no more than a hunch of the events that could be encountered at the end of the respective journey.
Maps and sketches, individually designed by a team of Japanese graphic designers and animation artists for every evacuation route, provided concrete clues. They could be printed out or downloaded to a smartphone before departure. They beckoned onto unusual paths, lead to unknown refuge spots, seduced you to unexpected encounters with the otherwise invisible and transformed even the most familiar surroundings into urban riddles, even before successfully tracking down the actual goal.

An additional project platform is online as blog.evakuieren.de 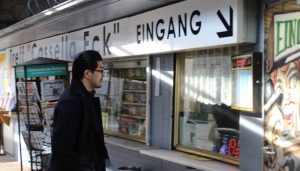