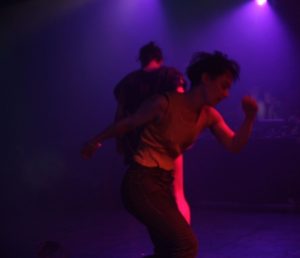 It is a group body. It is a plant and a group body of thinking choreography, of dance, of poetry, of imaginary, of realm, of exposing and proposing.

17.00 – 18.00
paradance
A proposal by Frida Laux
paradance is uncertain, it knows of itself only when it lets go of knowing, it is here for you if you need it. In unlocking the commons, it is sharing its somatic fictions of reconnecting neurons and reclaiming pleasure as an act of political warfare.
Voice: Ida Daniel, Thanks to Zuzana Zabkova

22.15 – 23.00
SURFACE I
A proposal by Tanja Kodlin in collaboration with Maria Tsitroudi and Andreea Belu

We are constantly moving in a fixed structure, drawing an image as a surface in the space. The space, and the ensemble of elements within it, are regarded  in their entirety as a singular entity and opens up a reflective landscape where you can pass through.