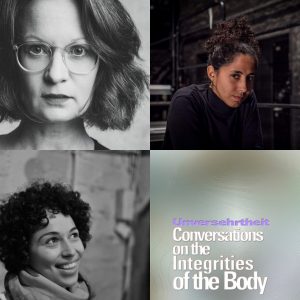 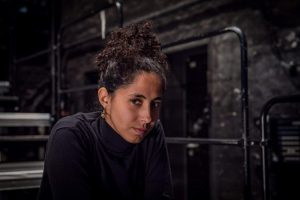 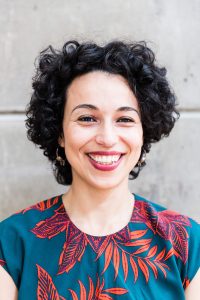 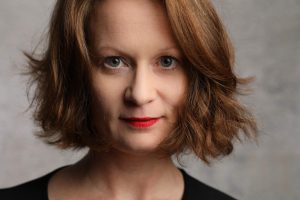 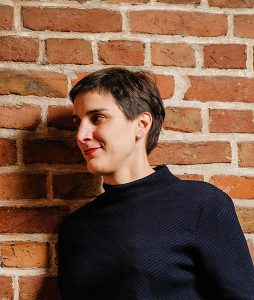 Both theatre director Leila Soliman and choreographer and performer Farah Saleh have placed questions of representation at the forefront of their work. In response to specific geopolitical contexts and physical as well as symbolic experiences of violence, they critically question which bodies and voices are silenced and rendered invisible in historical and contemporary narratives. In “Dramaturgical Perspectives # 4”, the artists embark on a conversation with Anna Wagner and Sandra Noeth about how artistic practice can work towards alternative archives and testimonies and the redistribution of aesthetic and political agency.

Language: English
Live stream via youtube
All videos of the series are available here until July 5, 2020.

Farah Saleh is a Palestinian dancer and choreographer active in Palestine, Europe and the US. She has studied linguistic and cultural mediation in Italy and in parallel continued her studies in contemporary dance. Since 2010 she took part in local and international projects with Sareyyet Ramallah Dance Company (Palestine), the Royal Flemish Theatre and Les Ballets C de la B (Belgium), Mancopy Dance Company (Denmark/Lebanon), Siljehom/Christophersen (Norway) and Candoco Dance Company (UK). Saleh has also been teaching dance, coordinating and curating artistic projects. In 2016 she co-founded the Ramallah Dance Summer School, which runs on a yearly basis. She is currently an Associate Artist at Dance Base in Edinburgh (UK) and a PhD candidate at Edinburgh College of Art.

Laila Soliman (born in 1981) is an independent Egyptian theatre director and playwright, living and working in Cairo. She studied at the German School (DSB, Cairo) and obtained her BA in theatre at the American University in Cairo and her MA at Dasarts (AHK) in Amsterdam. Her work stems from an interest in the state of flux in the contemporary socio-political climate and its influence on individuals, relationships and power structures. It relies on collective memories and personal histories as ways of bridging the gap between the official versions of events and intimate, individual experiences. Her performances have been shown in Egypt, Tunisia, Lebanon, Syria, India, South Africa and various countries in Europe. Amongst the most important works she directed are “The Retreating World” (2004), “Ghorba, images of alienation” (2006), “…At your service!” (2009), “Spring Awakening in the Tuktuk” (2010), “No Time for Art 0/1/2/3” (20111_2013), “Hawa ELhorreya, Whims of Freedom” (2014) , “The National Museum of the State Security System” (2015), “Zigzig”(2016), “Museum of Lungs” (2018).  Laila Soliman’s play “Egyptian Products” (2009) was published in the anthology Plays from the Arab World by Nick Hern Books and the Royal Court Theatre, London and her performance texts “A Diary in Scenes: And don’t forget never to wear tampons at a revolution!” (2011) and “No Desert Roses”  (2017) were published in Theater der Zeit magazine.

Sandra Noeth, professor at HZT – Inter-University Centre for Dance Berlin, has been active internationally as a curator and dramaturge, specializing in ethical and political perspectives toward body-practice and theory. Noeth acted as the Head of Dramaturgy and Research at Tanzquartier Wien (2009–2014). Recent publications include “Resilient Bodies, Residual Effects: Artistic Articulations of Borders and Collectivity from Lebanon and Palestine” (2019, transcript) and “Bodies of Evidence: Ethics, Aesthetics, and Politics of Movement” (2018, with G. Ertem, Passagen). As an educator, she was a Senior Lecturer at SKH-Stockholm University of the Arts (2012-2020) and a Resident Professor at Ashkal Alwan, Beirut (2015-16). See https://www.udk-berlin.de/personen/detailansicht/person/show/sandra-noeth/

Anna Wagner is dramaturg and artistic co-director at the theatre Künstlerhaus Mousonturm in Frankfurt am Main. After studying theater studies Anna worked as assistant curator for dance at the theater Hebbel am Ufer/HAU in Berlin and was head of the dance department at Theater Freiburg. At Künstlerhaus Mousonturm she works regularly as production dramaturge with artists such as Eisa Jocson, Paula Rosolen and Jetse Batelaan. she is also co-founder of “Tanzfestival Rhein-Main” and has curated or co-curated various international programs like “Indonesia LAB” (2015) and “This Is Not Lebanon” (2021). Interested to expand the notion of performing arts, she has initiated various special projects like Oper Offenbach (2018) and The Greatest Show on Earth – A Performance-Circus for the 21st Century (2016).