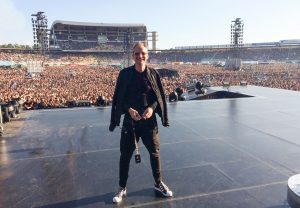 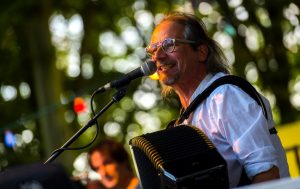 From May 10 – 16 the video is available on Vimeo on Demand. After the payment you can watch it within the next 24 hours.

Give this man a piano and a stool and he will entertain you effortlessly and with unbridled energy for an entire evening. Stylistically versatile and always spontaneous, that’s the pianist, accordionist, arranger and composer Stephan Weiler. He comes from Aachen, and yes, he has it, that infectious, Rhenish cheerful nature. He studied music in his hometown and in Cologne. He was pianist and musical director in musicals like “Hair” or the rock opera “Tommy”. And he was just as active in London’s West End as in the dream city of every musician: New York City. At the end of the 1990s, he established his own recording studio together with Oliver Poschmann and has been producing compositions for film and advertising ever since. Stephan Weiler is now a self-confessed Frankfurter, and has even named his current band – founded with singer Bernie Hahn – “The Frankfurters”. Who else has he shared the stage with and how did he come to play to a sold-out football stadium? – Join us to find out! And will he also be playing piano? Sure, we’ll just put a baby grand in front of him!

– Ticket sales close at least 1 hour before the start of the digital performance.

– Access: You will receive the link to the digital event on the PrintatHome-ticket PDF. Please call up this URL in your web browser on your internet-capable terminal shortly before the start of the event and enter your personal access code.

– After the stream there will be a live Q&A session with Stephan Seiler via Zoom. Access data will be communicated on the ticket.