High time for a celebration: 25 years ago, the – initially purely female – theatre collective She She Pop began enriching the highly dynamic artistic organism of performance with variations of their own making. Yet in their new revue “Canon”, the worldwide touring Berliners now turn the spotlight on those works of other artists and thinkers, which critically influenced and informed their work all these years, instead of focusing on their own past achievements. As a re-enactment of experienced moments of performance, this celebration of memory will be conceived, framed and formed by She She Pop in the here and now. Select surprise guests from the independent performance scene are invited to enrich the revue with contributions of their own. In this sense, “Canon” is a collective meditation on the writing of history and the “canonisation” of performance with all the tools of fleetingness, which this art form itself produces.

A production of She She Pop in Co-production with HAU Hebbel am Ufer Berlin, Kampnagel Hamburg, Künstlerhaus Mousonturm, FFT Düsseldorf and Münchner Kammerspiele. Funded by the City of Berlin – Department for Culture and Europe and Hauptstadtkulturfonds. Funded by Freunde und Förderer des Mousonturms e.V.

—> Biography She She Pop
X

Biography
She She Pop

She She Pop is a performance collective that was founded in the 90s at the Giessen Institute for Applied Theatre Studies. Its members are Sebastian Bark, Johanna Freiburg, Fanni Halmburger, Lisa Lucassen, Mieke Matzke, Ilia Papatheodorou, Berit Stumpf and Elke Weber, their creative producer. The members of the group are predominantly women and they work as a collective. The performers see themselves as authors, dramaturges and practitioners of their stage art. The inclusion of their own autobiographies is above all the method and not the purpose of their work.

The result is a form of theatre firmly committed to experimentation. The stage is always a place of intense publicness. Here, decisions are made, ways of speaking and social systems are tested, and speech gestures and social rituals are tried, rehearsed or discarded. She She Pop sees its task as a search to find the social limits of communication – and to go beyond the protective space of the theatre, in both specific and artistic terms. The theatre is turned into a space for utopian communication. The audience, too, is often given a tangible attribution and a special feature: all of She She Pop’s works are experiments or demonstrations in some way, which would be invalid without spectators.

Those who speak of love, who say those words with their strange visual qualities, must always speak in the present; and since the present differs from the past, the new way of speaking, if it is to be heard differently, must differ from the old way. In other words, no real words of redemption will ever be from something you have heard before. (Bruno Latour, Rejoicing)

Performance and memory:
In 1993 some members of She She Pop saw the performance BIOGRAPHY by Marina Abramović at the TAT in Frankfurt / Main, which inspired them to write their first work for the rehearsal stage at the Institute for Applied Theater Studies in Gießen. BIOGRAPHY was a chronicle in pictures of Abramović’s own performances. Twelve years later she staged SEVEN EASY PIECES at the Guggenheim Museum in New York, a seven-day performance of six historical performances by other artists (and one of her own) from the 1960s and 1970s. In 2018 Abramović showed performances of some of her legendary performances at the Bundeskunsthalle Bonn, including ART MUST BE BEAUTIFUL, ARTIST MUST BE
BEAUTIFUL from 1975.

Many performance artists’ works that have inspired She She Pop were only accessible via early images and video documentaries – the latter often in very poor quality. Today, we record our own work, planning it with great effort and paying attention to technical detail, and then spend time and money creating a good-quality video documentary – for posterity, because that’s all that’s left. However, even a good documentary can hardly reflect the richness of the joint experience during a performance. It is an inadequate surrogate that rarely excites or moves us if it is not supplemented by eye-witness reports. The witness or narrator always has their own agenda, which is not identical to that of the creator of the artwork. In any case, the original narrative is overwritten with this new agenda. Those of us who were too young to witness them remember – or rather, commemorate – the performances of Vito Acconci or Valie Export although we did not see them, because the stories we were told about them were so vivid, and the memory of the person telling them considered significant: because, in turn, their story became a performance for us (for example, in a lecture hall) and took on importance.

Theatre as a space for memory:
Hans-Thies Lehmann describes the theatre as a space for memory. “Theatre has to do with memory,” he writes, which in turn is inextricably linked to the idea of obligation. “Every moment in the “now”, which consciously shows the traces of its origin, is a link in a chain, in both its good and bad features, without which it would not exist.” Nevertheless, in Lehmann’s opinion, theatre is not a medium in things are stored. Instead, theatre creates memory: by compressing physical presence and collective concentration, an individual’s experience first gains meaning in the collection expectation of experience, and then becomes a memory. Lehmann speaks of a “now-time” of remembering, in which memory and expectation coincide. Those present have consciously separated themselves from the normal space-time continuum. They are in the theatre together – in a substitute space, a substitute time, ready to be moved emotionally and to remove their everyday layers of protection. This collective experience is the basis on which individual memory grows.

To remember a significant action, gesture or formulation and to repeat it – detached from its former context, but in front of witnesses of a community – is the definition of a ritual. CANON is a collective ritual of remembering. However, by repeating and overwriting works and scenes from the past, the emphasis is on the moment of performance, which gives immediate meaning to the relationship between the artists and the audience. CANON must, therefore, be a space for memory and not a museum. CANON questions the function of theatre, its significance for the individual, and its significance for the performance community, which therefore relates to society as well. Why do we keep coming back to this room we call theatre? What are we looking for? 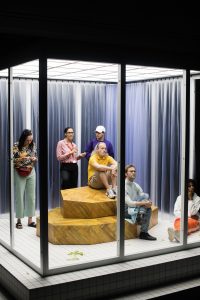 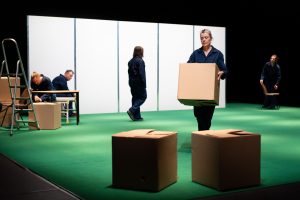