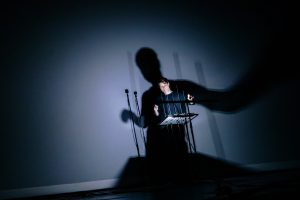 This artwork aims to create images of the new perception of ourselves, the new places we inhabit, the fears and emotions that we share. To be contemplated in a moment of introspection sighting the future that we are already living. All the human figures used in the work have been obtained by scanning the body and face of the artists (Gabriela and Jorge) with the intention of establishing the bases of this statement on a real entity, a figure that may not be perfect but is human.

F3 Studio is a multimedia art project integrated by the artists and designers Gabriela Reyes (Cero Tres) and Jorge Flores (FFAKT) both born in Mexico City. They are focused on the exploration and development of any kind of project that expose their particular way of interpreting light, image, sound, form, space and time with a tendency towards the essential and abstract. F3 merges the interest and skills of Cero Tres in the fields of exploration and control of light as a graphic and physical element in combination with FFakt’s affinity to detailed generative graphics and sound experimentation.

SHOW 2
The Echo Chamber – Martin Messier
The Echo Chamber is inspired by the ultrasound machine, and like that device, Messier probes beneath the surface of the tangible to map our subconscious. This audiovisual performance premiered at MUTEK Montréal, where The Echo Chamber rumbles, vibrates and pulsates, while the artist scrutinized and inspected matter using sound and light. Membranes, needles, sensors—all are elements that take us into a fantastical laboratory where sound and light shape the imagery of our psyche.

For more than 15 years, Martin Messier has created work that pushes the everyday imaginary into new terrain, magnifying entities by giving them a voice and reinventing their function. He also produces collaborative work that melds dance and music. At the centre of Messier’s dialogue between sound and bodies in motion, is a desire to flip the customary hierarchy associated with music and choreography, making sound the driving force of movement. Messier has presented his multidisciplinary work at esteemed events in more than 50 countries, including Berlin’s Transmediale, Barcelona’s Sónar and Paris’s Nemo. He has also been nominated or received special mentions or awards in Austria, Canada, Japan, and Switzerland. In 2010, he founded 14 lieux, a sound production company for performing arts to give sound work a platform on the art scene.