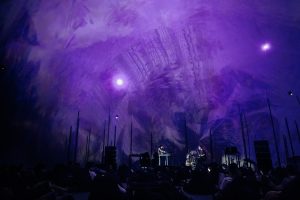 SHOW 1
Sound Sculptures – Juan Hurle
The Sound Sculptures is an ongoing research on how sound can be used to shape form and generate complex dynamic 3D objects that behave in the same manner as the sound fed in an attempt to achieve a synesthetic effect on the viewer by connecting hearing with vision. The program is developed on vvvv, and uses 3D Signed Distance field functions and a Raymarching Engine to generate the graphics.

The second part of this screening is Fractal Armor, also made with vvvv, it is a study of the possibilities of fractal math for the purpose of Music Visualization through movement, the video is made using signed distance fields of a fractal cube that receives fft analyzed sound and transforms this data into movement.

SHOW 2
Desert Bloom & Myriam Boucher
Montréal-based musician and producer Desert Bloom (Rachel Nam) makes intricate and ethereal synth-based tracks that draw on her twin passions of classical piano and electronic music. Originally from British Columbia, Nam came to Montréal to study biology, propelled by her fascination with the natural world. The Desert Bloom moniker is inspired by wildflowers that can flourish in the desert: that same vibrant energy is present in her debut solo EP1 cassette. The following release, DB, features rapid-fire percussive elements fused with intricate rhythms, adding a layer of urgency to her compositions. She played at MUTEK for the first time in 2019. For the MUTEK live set, Desert Bloom interweaved electronic textures to produce her signature dreamlike sound, while the set was stitched through with voice recordings expressing individual perspectives on love and resilience.

Myriam Boucher is a video and sound artist based in Montréal (Canada). Her sensitive and polymorphic work concerns the intimate dialogue between music, sound and image, through visual music, audiovisual performance, Vjing and immersive projects. Fascinated by the natural elements, she creates videomusic from the landscape and the relationship that human maintains with it. Her work, „evocative in its dynamism, brings its audience close to something akin to feeling multiple emotions all at once“ (The Link). Boucher’s videomusic compositions range from works for orchestra, ensemble, collaborative and solo A/V featuring DJ and VJ techniques fully notated and integrated into a concert music setting.

This performance will be streamed publicly for free. Please get a festival pass if you’d like to ask questions, chat with the speakers, and participate in the workshop program. By purchasing a festival pass you also help sustain this festival.
Language: Englisch