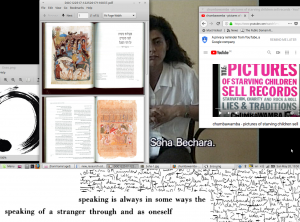 Three Biographies which are not mine

Li Lorian is an interdisciplinary artist and performer from Jerusalem. Her artistic process consists of a research of visual language and new performance practices; she is interested in political situations and how documentary elements can be processed into poetic means. She is co-founder of Pandora Collective (2010-2019) for independent contemporary theater. She was an artist-in-residence in Mamuta Art and Media Center in Jerusalem (2012), a grant-holder of Theaterformen Festival in Braunschweig (2014), artist-in-residence in Schloss Bröllin International Art Research Location (2015), Arad Art and Architecture Residency Program (2015) and Akademie Schloss Solitude (2016, 2017), there she developed the lecture-performance „Exodus“, selected for the Berliner Festspiele – Theatertreffen Stückemarkt (2018). She is a graduate of the School of Visual Theatre in Jerusalem (2011) and is currently an MA student in the CuP program at the Institute for Applied Theatre Studies in Gießen (2020), supported by a scholarship from the DAAD. www.lilorian.com

*
Revolution
Thirty years of the same old shit
Of music, money, hit after hit
Smiles, lies, sales, walls
That’s thirty years of rock and roll
They changed it’s name once or twice
Get rebellious with a company deal
Business thrives where honesty fails
Contracts? Con tricks!
Sing revolution, wait ‚til it starts
One eye on the bank account, one on the charts
Government-sponsored rebellion–buy it!
A bit more product to keep us quiet!
Shhh
Product sells, people die
Same revolution, wrapped in lies
In these sexist, drugged-up, rock and roles
The biggest prizes to the biggest fools
Ask the puppet-masters who pull the strings
‚Who makes the money when the puppets sing?‘
Ask the corporations
‚Where does the money go?‘
Ask the empty-bellied children
‚Tell me what are we singing for?‘
Until we pull down the walls
It’ll stay the same
Until we find something new
Make it change
I know there most be more
So what are we singing for?
These puppets, underneath the skin, have the same problems as you and me–
they want to be loved, don’t know where to begin. Just a wall’s width away, but
impossible to get close. Offstage, with nothing to hide behind, the puppets are
running away. And meanwhile, we’re running away from ourselves… and
meanwhile, we’re running away from ourselves… and meanwhile, we’re running
away from ourselves…
If our music makes you happy or content
It has failed
If our music entertains, but doesn’t inspire
It has failed
The music’s not a threat
Action the music inspires can be a threat!
I know there must be more…
*
Acknowledging the complexities inherent in any speech-act does not necessarily
mean taking away or compromising the qualities of a fine story. Simple and direct
in its indirectness, it neither wraps itself in a cloud of oratorical precautions, nor
cocoons itself in realist illusions that make language the simple medium of
thought. Who speaks? What speaks? The question is implied and the function
named. But the individual never reigns, and the subject slips away without
naturalizing its voice. S/he who speaks, speaks to the tale as s/he begins telling
and retelling it. S/he does not speak about it. For, without a certain work of
displacement, “speaking about” only partakes in the conversation of systems of
binary opposition (subject/object; I/It; We/They) on which territorialized
knowledge depends. It places a semantic distance between oneself and the work;
oneself (the maker) and the receiver; oneself and the other. It secures for the
speaker a position of mastery; I am in the midst of a knowing, acquiring, deploying
world – I appropriate, own, and demarcate my sovereign territory as I advance –
while the “other” remains in the sphere of acquisition. Truth is the instrument of
mastery which I exert over areas of the unknown as I gather them within the fold
of the known.

Trinh T. Minh-Ha, „Cotton and Iron in When the Moon Waxed Red“
*
It might seem incredible, but I had just been fundamentally transformed. I had rid
myself, once and for all, of the mask of the superficial and carefree student. I had
lived schizophrenically for so long, never letting down my guard or confiding in
anyone apart from M.A and Rabih. Foe months, I had lied, tricked and hid. Now
that I had shot Antoine Lahad, I could finally say who I was and what I thought.
At last, faced with my enemies, I no longer had to play a role.

Soha Bechara, „Resistance – My Life for Lebanon“
*
Chumbawamba was our vehicle for pointing at the naked Emperors, for telling our
version of the truth; it gave us more than the joy and love of playing live, writing
songs and singing together – it gave us a chance to be part of a broad coalition of
activists and hectors, optimists and questioners. But eventually the rest of our
lives got in the way and we couldn’t commit the time and enthusiasm that the
band demanded. Couldn’t keep up with whatever responsibilities came with a
band like this.

September 2012
*
For the Jew who lives within this land, which is the vertical center of space,
midpoint between the upper and lower world, the horizontal center of the earth,
and the sacred center of his history, there is an awesome responsibility analogous
to the common motif of perfection in the performance of ritual in the history of
religion. For there is a close correspondence between things which occur in the
sacred (especially within the Temple in Jerusalem) land and actions in the
heavenly Tabernacle.