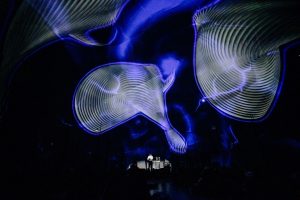 SHOW 1
Creto – APNOA
Emerging from the chaotic times of cultural and social isolation, Creto frenetically manifests into mayhem. An immersive havoc that reveals abundant possibilities for exploration. In this chaotic realm, the sonic and visual dialogue is dictated by the rhythm. The two elements twist and twine in a tumultuous journey to intersect in a temporal composition.

APNOA is an audiovisual collective, founded by Sebastian Drack and Tobias Feldmeier in 2013. The artists aim for forward-thinking ideas and strategies in practice and theory, in order to provide immersive multi-sensory experiences and narratives, presented as audiovisual performances, installations and multimedia productions. Their work is settled in the field of performative interaction and seek for an ambiguous character generating synesthetic correlations within the act-theoretical semantics and immediate, aesthetic perception.

Yuma Yanagisawa is an artist who explores creative computation. He creates immersive installations and experimental films with real-time computer graphics. His work investigates the possibilities of code-based illustrations, photorealistic visualizations, and their connection in visual art.

2018’s self-released solo album B-Stock was crafted in Berlin, a meditation on emotional turmoil that incorporated the sounds of the physical environments he lived and moved through. Transforming urban noise through resonators and pitch modulation, it’s a striking debut—a deep-listening study in what it means to be present and grounded in the moment. 2020’s Therapy With Colour goes even deeper, plumbing the depth of the listener with the motive of re-programming thought-patterns through ritualistic sound shuffling in an attempt to reduce bias and open deeper self-connection. T. Gowdy’s shimmering beams of techno-indebted rhythmic light dart and tumble elegantly around the track’s melodic structure, grounding everything in kinetic, entrancing energy.

For MUTEK 2020, T. Gowdy investigated the concept of “time-distorted reality”, transforming experimental musique concrète into patterns of symmetrical sonic rhythm, while a live video stream broadcast from a surveillance camera bathe the performance and audience in waves of iridescent light.

In wildly kinetic and colourful projection mapping, video, laser lighting and LED stage displays, BunBun concocts a visual carnival embedded in electronic music. BunBun has performed live at international festivals such as Bass Coast, Eclipse, Igloofest, Valhalla Sound Circus and AIM as well as festival afterparties and local underground events, reflecting the beat and mood of the music and elevating the audiovisual experience for event goers. At MUTEK, BunBun added a uniquely animated, high-energy ingredient to the captivating sounds by T. Gowdy.