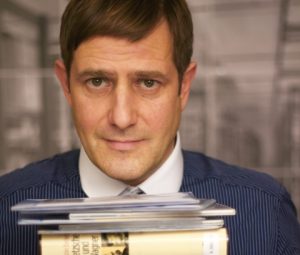 Andreas Dorau’s tenth studio album “Die Liebe und der Ärger der Anderen” (Love and the Anger of Others) is this summer’s psychologically most crafty German-language album. Produced and written by and with various friends, such as Carsten Friedrichs, Maurice Summen, Francoise Cactus, Wolfgang Müller, T.Raumschmiere or Snap!, it’s a musical jackalope, friendly up front, evil at the back. Is it all post-NDW? Nope, the music isn’t indebted to any specific genre, wanders through dance and pop. Styles that came after, such as house, are favourably and gladly adopted. Styles that came before, such as beat, wave and soft rock, are just as happily woven in. Dorau’s musical weaving machine is alchemistic and produces pieces, whose ingredients only a stuffy musicologist’s centrifuge could separate.