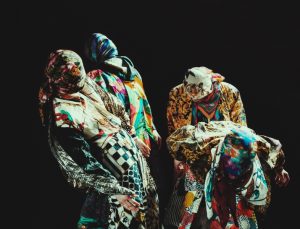 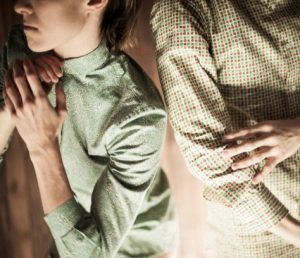 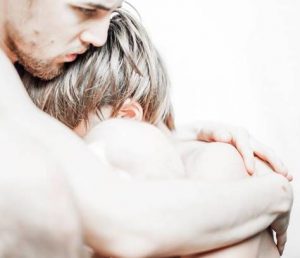 The game begins with the sound of rustling fabric, while the eyes of the audience take a while to gradually perceive the silhouettes of four dancers. In BAND, colourful lighting effects flicker on costumes sporting wild patterns to a swelling beat of circling bodies. Ingri Fiksdal concentrates attention on the simple gestures in group headbanging at a psychedelic concert and explores the alleged intimacy that it sometimes produces between complete strangers. Without music, without instruments, without songs – purely by concentrating on the circular movement, Fiksdal manages to project the pounding-drifting sense of trance outwards in her visually fascinating choreography.

All dressed up with nowhere to go

The piece All dressed up with nowhere to go by Italian choreographer Giorgia Nardin portraits two bodies so vulnerable that they seem cut off from social reality. Standing on one leg, they dance as if frailly clutching the ground, just short of losing their balance. Their hands seem to run on automatic as they touch their faces, their hairs, their cufflinks and over and over again check and adjust their shirt collars. Whatever it is that these gestures point to, it can no longer be located. Nardin translated with great aesthetic sensitivity the tension of two bodies lost in reverie into touching images of melancholy beauty.

In the frame of Strange Gestures (Melodramatic Cannibals Inventing Filigree Rituals) – Dance and Performance Festival.
A Künstlerhauses Mousonturm project in cooperation with aerowaves – dance across Europe * Co-funded by the Creative Europe Programme of the European Union.
Concept: Olivia Ebert