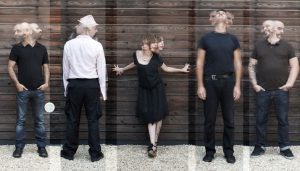 The Swans – the famous New York noise extremists led by the musical magician Michael Gira – are alive and well and promise to provide a loud and infernal din, when they stop off at Mousonturm. More than ten years after disbanding his legendary band Swans, who fundamentally influenced the post punk and new wave scene of the 80’s and early 90’s, Gira reanimated them three years ago. Last year, they recorded The Seer – a massive two-hour project, the essence of their 30-year career and according to critics a opus magnum: 120 minutes of nasty dissonances, majestic sounds, rhythmic momentum, hammering tribal beats and apocalyptic folk, gospel and trance. Experience the reunited Swans at one of only five concerts in Germany in May at Mousonturm: stupendous, disturbing, loud. Earplugs recommended!