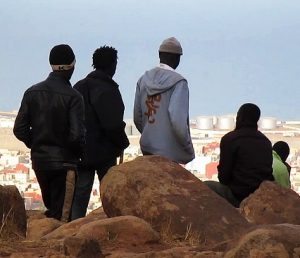 Les Sauteurs (Those who jump)

For more than 15 months Abou Bakar Sidibé lives on Mount Gurugu. Nowhere else lie hope and fear closer together than on this mountain in Marocco’s north. Just like hundreds of other young men Abou has started the weary way from sub-Saharan Africa to Europe. Longingly they are looking at the spanish enclave Melilla and the Mediterranean Sea. But many of those who are fleeing from lack of prospects and civil war, trying to get to Europe across the ternary secured border installations, pay for it with their life.

The two filmmakers Estephan Wagner and Moritz Siebert gave Abou a camera. He resists the temptation to sell it and turns into the chronographer of his companions of fate’s daily struggle for existence. In this community, the people organize themselves in order to survive – and in order to overcome the border one day. Les Sauteurs is a unique record of our time. Impressively, it sets the stories and faces of the refugees against the anonymous pictures of drones and surveillance cameras.