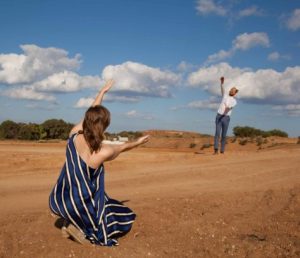 Next to Near (open rehearsal)

Born in Israel in 1984, May Zarhy created her first piece for the National Choreography Biennale “Shades in Dance 2001” Tel Aviv, before moving to the Netherlands in 2002 to study dance at the Rotterdam Dance Academy. In 2005, she assisted William Forsythe in the creation “3 Atmospheric Studies”. In 2007 May was a member in ex.e.r.ce in Montpellier France, directed by Mathilde Monnier and Xavier Le Roy. In 2009 she formed together with Fabrice Mazliah and Ioannis Mandafounis the collaborative trio “MAMAZA” and created together “Z.E.R.O.” (2009), “Cover Up” (2011) and “The Nikel Project – songs&poems” (2012) in collaboration with the contemporary music ensemble Nikel, as well as “Pausing” (2012) with Ioannis Mandafounis, which have been shown and co-produced by numerous venues and festivals, such as Kunstenfestivaldesarts, Künstlerhaus mousonturm Frankfurt, The Forsythe Company, Theatre de l’Usine, Les Rencontres Chorégraphiques Internationales de Seine-Saint-Denis, PACT Zollverein Essen, Festspielhaus Hellerau, deSingel Antwerp, Onassis foundation Athens etc.