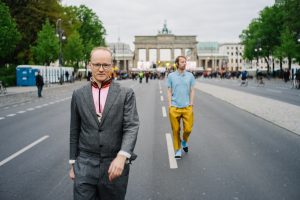 PeterLicht is one of the most versatile artists in German-language pop music: as an Indie-pop musician, his hit song “Sonnendeck” rocked the charts in 2001, as a (book) author he is a recipient of the Ingeborg-Bachmann Competition’s Audience Prize, as a playwright he most notably made a name for himself with his Moliére re-writings, and as a columnist he recently also wrote for the Süddeutsche Zeitung. After a biblical seven years of drought for the fans of his music, this universal artist now finally returns to release his new studio album “Wenn wir alle anders sind”. In these times of global hyper-performance, we need his voice more than ever. Almost wistfully, we remember when capitalism was still a rascal and when we buried our iPhones at the river’s bend. Time has accelerated; PeterLicht has outpaced it in old shoes. It is time to sing new hymns.