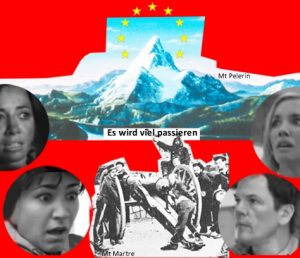 In 2005, it became known that the script for the 1990’s TV soap Marienhof was being secretly rewritten by the lobby group “Initiative for a New Social Market Economy”. Was this part of a secret program, initiated by the Mont Pèlerin Society, meant to convert all of Europe to neoliberalism? In 2011, the soap was surprisingly discontinued and the Marienhof along with its inhabitants gradually faded from memory. Yet in 2016, the young group ScriptedReality is suddenly invited to perform on the Marienhof marketplace. They find the town to be almost uninhabitable and devastated. So they decide to really get the job done and write a completely contrary version of the series: a didactic-dramatic happening in a post-apocalyptic soap setting, performed by the audience.


By and with Tilman Aumüller, Jacob Bussmann, Christopher Krause, Dominik Meder, Arne Salasse, Ruth Schmidt. * With the audience * A ScriptedReality production, co-produced by Freischwimmer * Funded by the Cultural Department of the City of Frankfurt am Main.