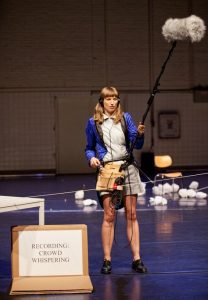 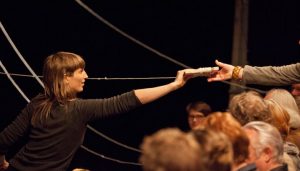 After the extravagant scientific cabaret of Dark Matter and the strange experimental set-ups of Untried Untested, performer Kate McIntosch plans a new attack on the very foundations of Mousonturm in her new piece All Ears. Driven by her ongoing fascination with the extremes of destruction and creation, sense and nonsense, McIntosh’s work balances on the thin line between experiment and entertainment. In All Ears, she invites the audience to lend her their ears, as the stage becomes an adhoc laboratory for a series of unusual recordings and acoustic experiments using everyday objects and materials. Alternating between curious scientist, mischievous charming mistress of ceremonies and eclectic storyteller, she leads the audience through multiform audio landscapes packed with odd acoustic and spatial ideas, finally transforming them into a posse of manipulators, who know how to make themselves clearly heard.