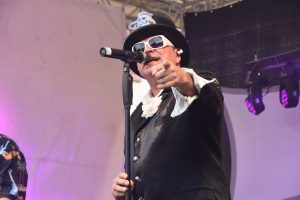 Nearly 25 years have passed since the character “Roy Hammer” and his band “Die Pralinées” were created on a whim. The party band and their extroverted frontman represent “party with a whiff of Las Vegas”. Roy’s reputation reaches far beyond Frankfurt and the Rhine- Main area. At the Commerzbank Arena, football fans of Eintracht football sing the adaptation of Pippi Longstocking that he wrote for the club and no matter where the band goes, the shack is full and people everywhere in the very best of moods. On Carnival Sunday, Roy Hammer – the self-proclaimed (but as yet uncrowned) schlager king – will come to the Mousonturm Lokal to exude a bit of tinsel flair. O course, we are also interested in the musician behind the character. Who is Roy Hammer really, what moves him and where does his love for German schlager music come from? Together with the guitarist of the Pralinées Billy Lasagno and host Gregor Praml, he will also be sharing a few of his hits with us.