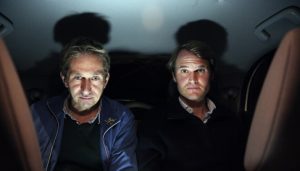 Schorsch Kamerun considers himself a “merry anti-capitalist”. Be it with his conceptual punk band Die Goldenen Zitronen or in his work as a director – using clever music and critical eye on the political system, he sets out to battle repression, levelling down, the illusion of continual economic growth, and every form of revolution fatigue. As an actor, Fabian Hinrichs is everything, but a service provider for directorial concepts. He received just as much acclaim for his collaboration with René Pollesch at the Volkbühne in Berlin, as well as for being the new Franconian “Tatort” inspector. In their newest joint project, Hinrichs and Kamerun not only share the stage – they also developed the piece together and are joined by composer PC Nackt and dancers of the Skvo’s Dance Company from Minsk. Together they have teamed up for an epic performance about how to be or not to be in predatory capitalism and ways of escaping from the all-exploitive apple strudel.